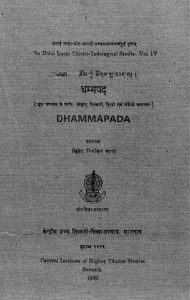 The Dhammapada, also known by its Sanskrit name, the Dharmapada, was taught by the Buddha in 426 verses and arranged into 26 chapters. The Preface, by “Chhi Med Rig Dzin Lama”,  says “This new edition contains versions of the text in Pali, Sanskrit and Tibetan with Hindi and English translations.” The Acknowledgement states that “I would also acknowledge the help given by  Mr. James Low in the correcting and writing out of the English translation.”

In 1985 the Central Institute of Higher Tibetan Studies published this book. It contains versions of the text in Pali,Sanskrit and Tibetan with Hindi and English translations.

The 426 verses of the Dhammapada were written down in Pali and it is part of the Tripitaka of the Theravadin Hinayana canon. It was not, however, in the Tibetan canon, the  Kangyur, and apart from a few verses, it was not known in Tibet until Gedun Chos ‘phel, with the support of the Maha Bodhi Society, translated it into Tibetan in the first half of the 20th century.

In the Preface CR Lama (Chhi Med Rig Dzin Lama) writes that he “would like to mention that in 1945 Rev. Gedun Chos ‘phel stayed in his house at Tso Pema, H. P. for a week during which time they had many talks on the Dhammapada.”

In 2018 Wendy and Cakka worked to make this available in digital format and so now it is freely offered for you to read. Click to Download or Read the book.

You can also visit Wendy’s blog and read what she has written there about James’ revised translation and commentary to this.