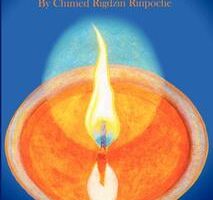 Andreas (of Khordong Publishing) has now prepared Radiant Aspiration as a Kindle book and you can buy it at all the European Amazons plus www.amazon.com.  “The book includes the beautiful Butterlamp Prayer which is the heart of this book. It arose from the aspiration to benefit one being and all beings. The one person was Tulku Tsorlo who was living in Tibet. His closest disciple, Chimed Rigdzin, was living in India, in retreat in Tsopema. Chimed Rigdzin, also known as Lamaji, C.R. Lama and Zilnon Lingpa, would never see his teacher again due to the Chinese invasion of Tibet. However, he felt his presence and often met him in his dreams. This prayer of aspiration was written by him in one sitting to ward off difficulties for Tulku Tsorlo who was then sixty-one, an age of transition linked with problems.

For many years CR Lama annually offfered it with 100,000 butterlamps and his students continue to do this in India and in Poland.  It also includes the sutra of the Story of King Golden Hand. The prayer can be read as a practice and a teaching by anyone who is interested. The key point is to engage with an open heart intent on the benefit of others.”