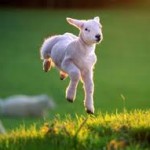 Extracts
…In the springtime when you go out in the country you see the small lambs jumping about. This is the mind of a meditator, because the field is open. There is nothing to do except jump about and run around. The mind can go anywhere. If you have an angry thought you can just have the angry thought, because in the field sometimes the lambs bump into each other and knock each other over.

…The time for observing is in meditation. But when we bring the meditation into the world, it is the time for participation, which is to say, being a part of the world. We are already in the world. This is our world, so if we attend to the world, we will flow into activity. There is a space, there is something that needs to be done, and we just do it. Then life can be easier because you don’t have to think and work out what to do.

Share this!
You are here: Simply Being > Texts & Transcripts > Texts in English > Awake in illusion. Hamburg, 2011
Share this!