Last time I was here I talked about tantra and I’ll return to that theme this time. This afternoon I’ll make some general remarks, bringing up the theoretical underpinnings of the practice of tantra and tomorrow we will go through the Chenrezig practice a practice which is done in this centre. In making some commentary on that, I hope to bring out how the philosophy is informing the structure of the practice. 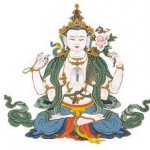 “…It’s not that you either have faith or you don’t; it’s that faith arises from causes. When we find that the flame of faith is going down we can attend to the causes and then it will go back up again. It’s a very simple approach to things and in fact is very important, because the power is in our hands. We are the ones who can direct our own inspiration; we are not puppets dependent on forces far away. ”
“…One aspect of tantra is that it’s a system of magic. By magic I mean that it uses the idea that mentally developed symbols, symbolic practices and rituals have a transformatory effect in the world. There are mantras for stopping the rain, for starting the rain, for curing smallpox… There are mantras for almost everything. It’s called magic; it’s called magic in Tibet too…”.
“…The other aspect of tantric practices is that they are designed to soften up the world. This little wooden table in front of me is wood and as wood, is a hard thing. If we see this table as being separate and existing in itself, then the table and myself are two separate entities. Then the reality of the table is the parallel but separate reality of myself. But both the philosophical position and the meditation experience of emptiness all serve to undermine the sense of a real separation between a hard wooden table out there and some kind of soft invisible mind inside, which is apprehending it through these water-bubble eyes…”

The goal and structure of tantra 8
Tantra is continuity and connectedness 11
Tantra is a ‘result path’: we act as if we have already arrived at the result 13
How tantra uses devotion to pull samsara and nirvana together 14
Chenrezig practice 19
Evoking or developing the damtsigpa form of the deity 20
Using devotion to focus the attention 22

Share this!
You are here: Simply Being > Texts & Transcripts > Texts in English > The Nature of tantra: Chenrezig practice. Bremen, Oct. 1994
Share this!