At the end there are 18 attachments with instructions on how to do 10+ practices taught on the retreat. 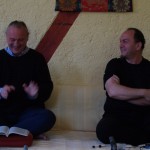 James Low has been asked to publish some of his talks for quite a time.
Coincidentally, serving as his translator during several workshops in Germany I had the idea of translating some of his talks into German in written form.
Then we realized that the English material first needs to be edited. As usual the edition of this sort of spoken word needs a balance between the original spontaneity and an added coherence that replaces the lacking visual and contextual experience of the workshop situation.
As I actually like very much how James Low is talking, I always stayed hard on the side of the original word and tried to intervene only in places I felt it is necessary – of course with all the risk of not being a native speaker (if that really exists!-one could doubt about that in Germany).
I hope this ansatz worked well and the reader will have the full enjoyment of his speeches, and their clarifying effect as well.

Share this!
You are here: Simply Being > Texts & Transcripts > Texts in English > Purification in hinayana, mahayana, tantra and dzogchen. Eifel retreat, Oct 1997
Share this!